What Kind of Narcissist Are You?

What Kind of Narcissist Are You?

If your friend is stuck in front of the mirror all day, you could call them a “narcissist.” In general, people use the psychoanalytic term “narcissism” to describe people who think themselves to have a perfect appearance. But, did you know this term also describes people who speak and act in a self-centered way? 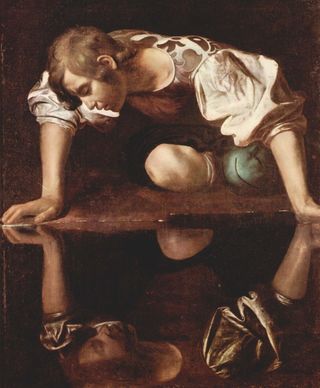 The term “narcissism” originally comes from the famous story of the young man Narkissos (or Narcissus) of Greek mythology. The story describes him as a man who was more beautiful than any other woman. However, he didn’t know that he had an impeccable appearance. One day, when Narkissos was hunting in the forest, he found a spring to drink some water. He leaned over the pool and saw his face reflected on the calm water. He had never seen his face before; he was so surprised to see such a beautiful person looking back at him. He lay down in front of the pool, his eyes glued to his own reflection on the water. Day by day the time passed and Narkissos didn’t drink or eat anything; he just stared at his own reflection. He was so desperate to touch it or at least talk with it, but it couldn’t have been possible. He became weaker and frailer with sorrow and one day, he died, leaving the last word “goodbye…”

Today, narcissism is used to refer to excessive self-love. It is not only about appearances but also about one’s way of thinking. People with unhealthy narcissism mistake themselves for being too great and act selfishly without respecting others. It prevents people from having meaningful relationships. The key reason why narcissism occurs is because of the lack of understanding and perceiving reality. As shown in the short story of Narkissos, the handsome, young man died because he didn’t realize the reflection was his own.

However, narcissism does not always have a negative connotation. The term “healthy narcissism,” is used to describe a certain amount of self-esteem that will help you think positively about yourself and respect others. People who have healthy narcissism reflect on themselves and show a desire to correct their shortcomings. They even give out positive energy around them.

So, now that you know what narcissism is, think about your relationship with others. Are you a healthy narcissist?

Some information about this general settings option